Jodhpur: Mehrangarh Fort inside out 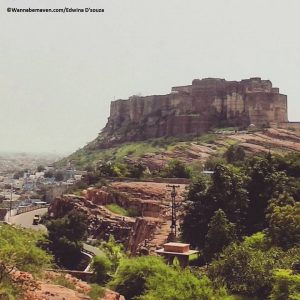 I was on a solo trip to Agra and Jodhpur, when I found myself at the Agra Cantt railway station reading Monisha Rajesh’s Around India in 80 Trains. My own train to Jodhpur was delayed by four hours. By midnight, I had boarded the Howrah-Jodhpur Express and reached Jodhpur the following morning.

One cannot visit Jodhpur and leave without checking the Mehrangarh fort. The monumental structure is Jodhpur’s identity and the highlight of your trip. Rao Jodha, founder of Jodhpur, built the Mehrangarh fort in 1460. The 120 feet gigantic monument stands on a 400 feet cliff making for a jaw dropping view. The entire city of Jodhpur can be viewed from any of the vantage points within the fort.

I reached Mehrangarh Fort on a bright sunny morning and strolled through its well-stocked museum. There are exhibit rooms for palanquins (palkis), paintings, costumes, musical instruments, furniture, armoury and more. 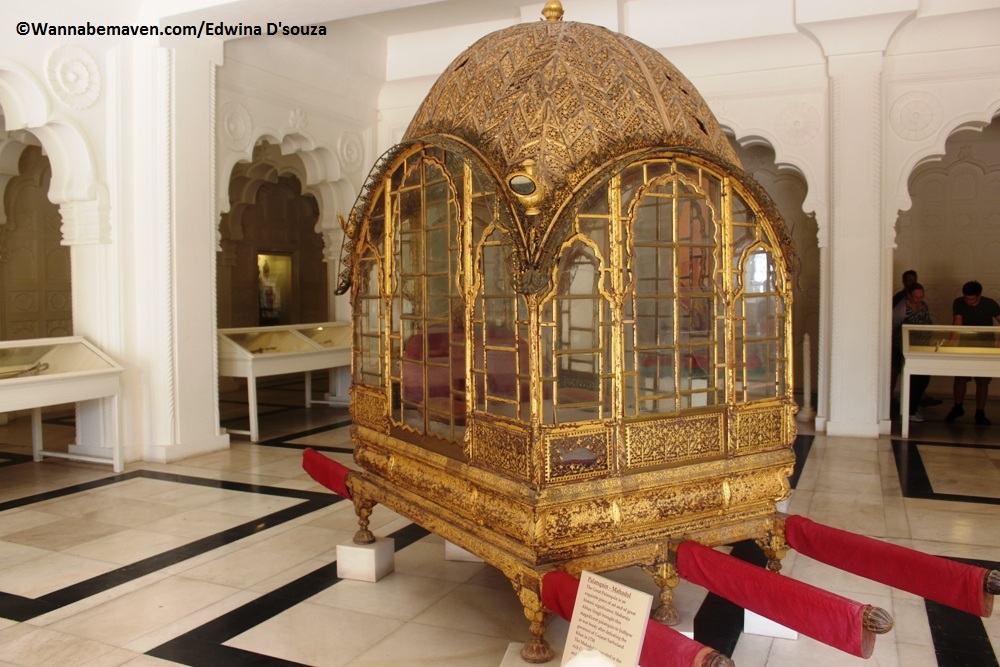 Some very interesting exhibits include carpet weights or Mir-e-farsh made from camel bone and paintings using squirrel tail brush. A 19th century wine flask, Chuski is designed as a woman wearing a turban, her raised hand designed to pour the wine or opium water. I would highly recommend that you opt for an audio guide as it will help you to better appreciate the exhibits at the fort. 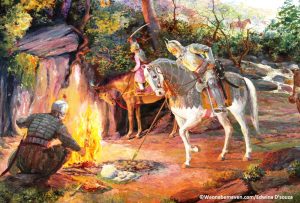 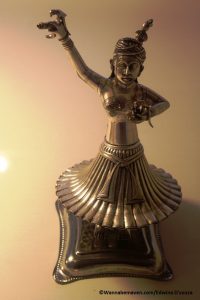 The Sheesh Mahal looks stunning with chunks of glass inlay work and so does the Moti Mahal with intricate gold filigree ceilings. The coronation room with its empty dusty throne is witness to the room’s historic past. 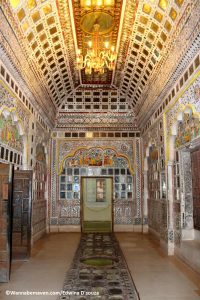 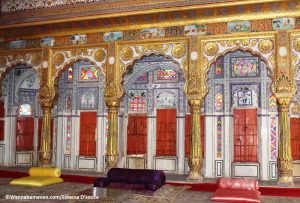 My favourite though was the bed chamber of Maharaja Takhat Vilas. The entire room is decorated from ceiling to floor with lacquer paintings and inlay work. It is an absolutely stunning sight. And I was so engrossed in admiring the room that I had to be told to move ahead so others can catch a glimpse as well. Interestingly, Takhat Vilas was the last Maharaja of Jodhpur who wholly resided in Mehrangarh. 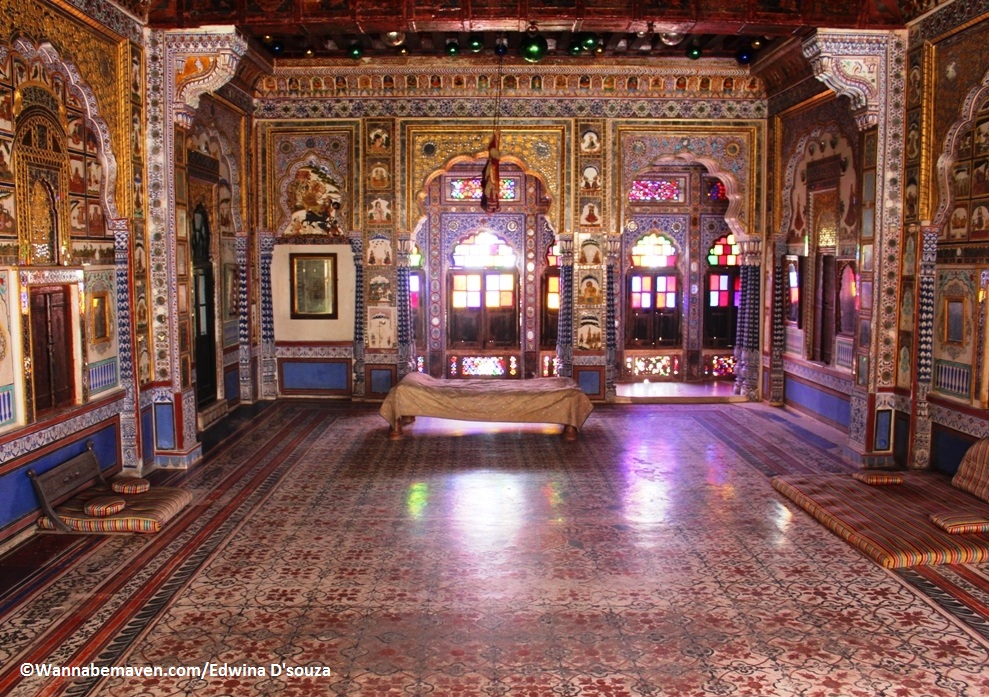 But exploring the Mehrangarh Fort on foot can be exhausting. There’s a lot to walk and some steep climbs too. For those who may find it difficult, there is a lift that reaches you to the museum on the top most level, 120 feet above. 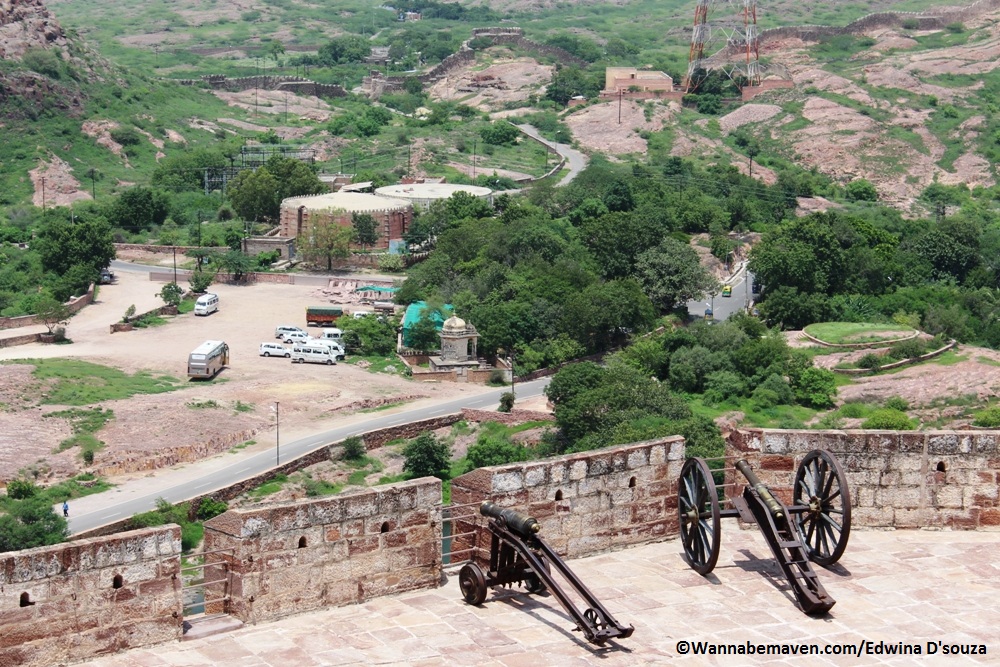 After exploring the fort from the inside, it was time to explore the exteriors of the fort. I planned to take the heritage ziplining tour of Mehrangarh Fort by Flying Fox Asia. Imagine what a view it would offer…gliding pass the ramparts and exploring the length and breadth of the monument.

I reached the Flying Fox Asia office inside the fort and was greeted by a large group of international tourists. I was the only Indian in the batch with 10 Germans, two girls from Sri Lanka and one from Singapore. The girls were studying at a university in Singapore and were backpacking in Rajasthan for 10 ten days. I left my belongings at the desk and joined the group for a briefing on the dos and don’ts followed by some hands-on practice. 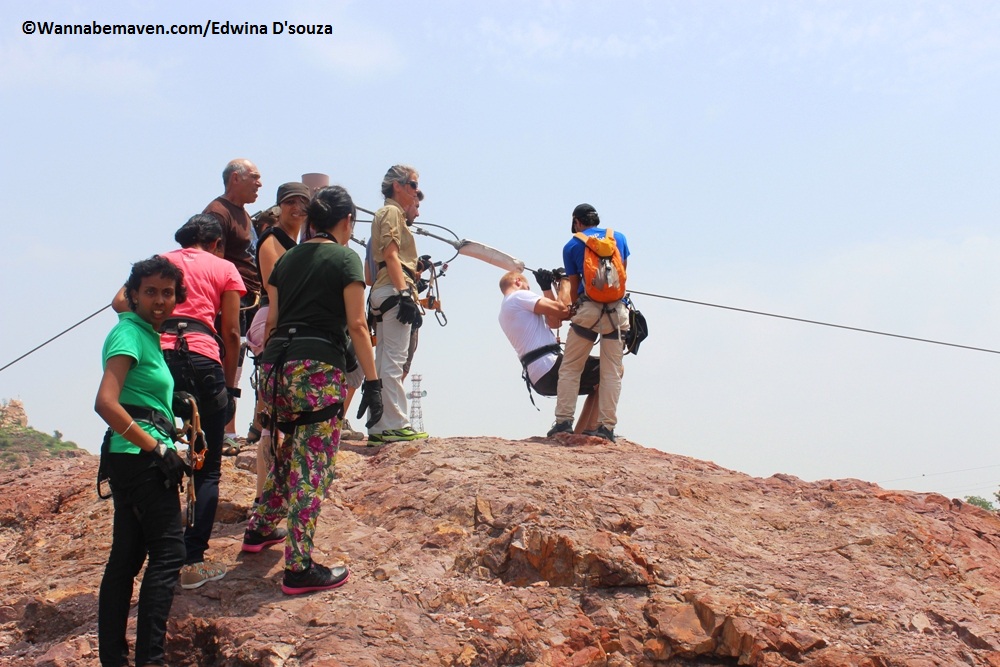 The real test was when I exposed myself to the harsh afternoon heat. But the gushing breeze hitting my face while gliding speedily through the cables more than made up for it. We glided through six cables…each offering a view better than the other. From the Ranisar Lake to the Chokelao Garden, the rocky mountain top and the Rao Jodha Park, we saw it all! 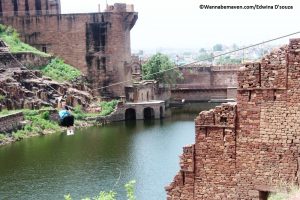 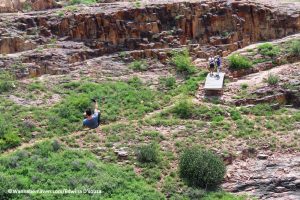 I glided through the first five cables like a pro. On the sixth cable which is intentionally low to check your technique, I lost momentum and stopped three quarter way. The instructor then shouted from the landing point, ‘take your legs on the cable and gradually pull yourself forward using your hands’. It was exhausting but fun! 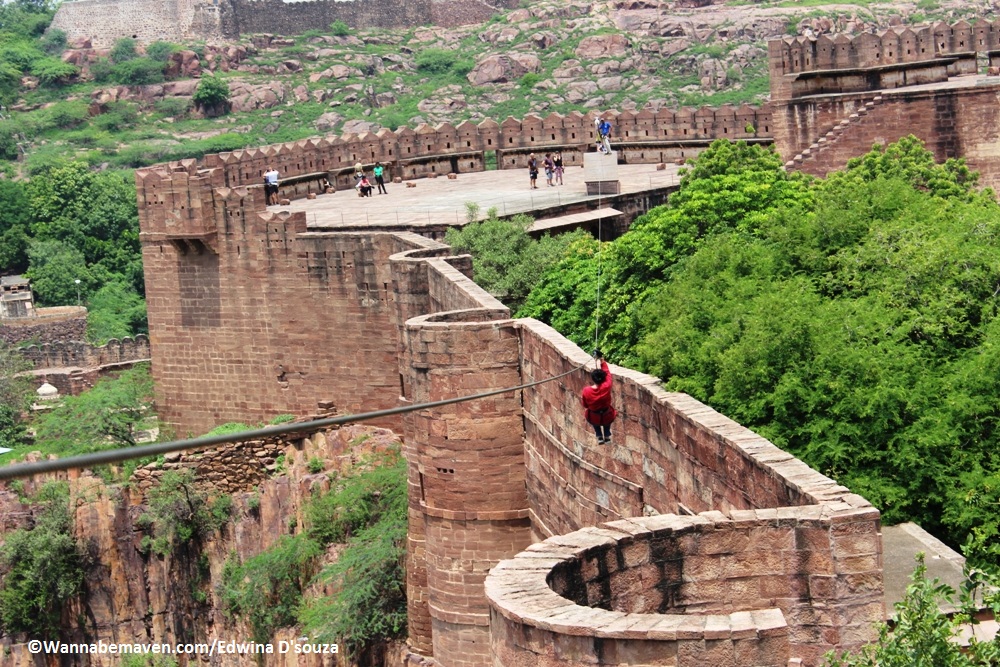 And when we thought that the session had concluded, the instructor asked us to follow him to another point for one last ride. We zipped passed the fort boundary with a view of the stunning blue city on one side and the massive fort on the other. A highlight moment and what a way it was to end my visit to the Mehrangarh Fort. 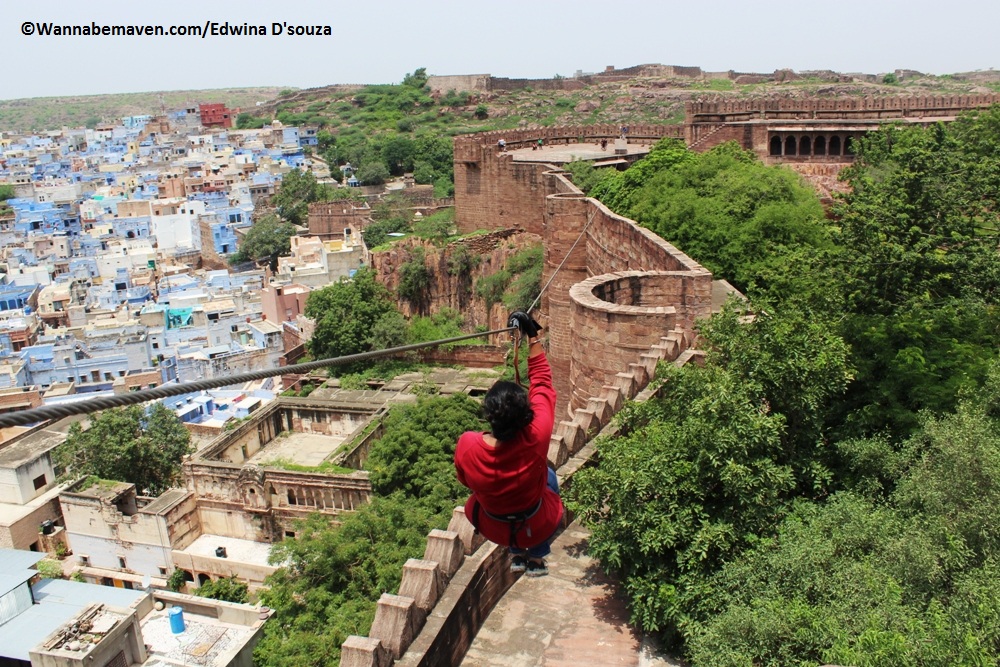 Practical things to know about ziplining at Mehrangarh Fort 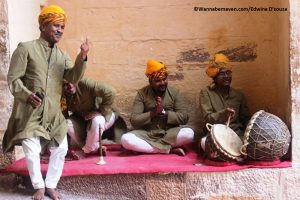 Where to stay in Jodhpur

I stayed at Mango Hotels Jodhpur for two nights. It’s a reasonably priced property with spacious rooms and an in-house vegetarian restaurant. The upper end rooms of my hotel opened to the view of the Mehrangarh fort. If you’re in to splurge, check out the Ajit Bhawan Palace or Taj Hari Mahal. For backpackers, Castle View Homestay and Hem Guest house are highly rated in the city.

Rafting the Kundalika – My tryst with adventure in Kolad