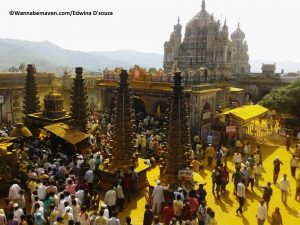 I was randomly surfing the web one evening when I saw a picture of a temple in Jejuri covered in carpets of yellow. A quick search told me that the spectacle is called the “Bhandara Festival”. Bhandara is turmeric and the festival is related to a local God named Khandoba.

Khandoba was a folk deity belonging to the 9th century. He was believed to possess qualities of Lord Shiva and his wives: Mhalsa and Banai – who were honored like Parvati and Ganga. The main center of worship for Khandoba is the Khandoba temple in Jejuri, while he has 10 other temples across Maharashtra and Karnataka. 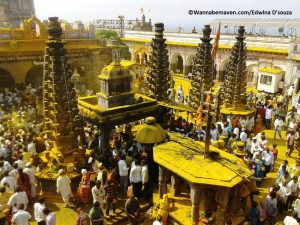 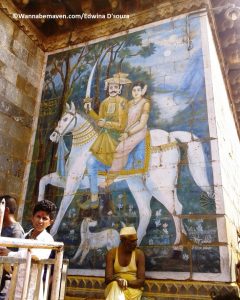 (left) Khandoba temple during the Bhandara festival; (right) Popular images depict Khandoba on a horse with a sword, accompanied by his wife Mhalsa and a dog

Khandoba is a revered deity among the Dhangar tribe, herdsmen, shepherds, farmers and the nomads of the mountains apart from a few Brahmin priests. Some of his idols have four arms and one of the substances he carries includes Bhandara-patra that is a bowl of turmeric powder. The Bhandara festival is a popular rural festival in Jejuri that happens on the day of Somvati Amavasya. This basically means a no-moon day that coincides on a Monday. In a year, the occasion may occur twice, or thrice may be. 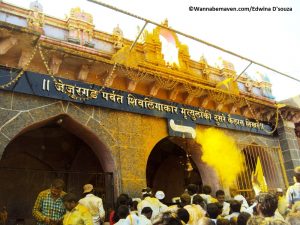 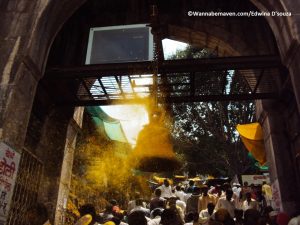 Turmeric powder filled the air. People bought packets of turmeric for as cheap as Rs. 10 and participated in the day long celebrations by shouting “Jai Malhar” every time they threw turmeric on the god and on each other. The site turned a shiny yellow. For this reason the Khandoba temple is also called Sonyachi Jejuri. For the locals, the turmeric is symbolic of gold.

While similarities can be drawn between the Bhandara festival and the Indian festival of colours – Holi, to my vivid imagination, this felt like glimpses of the La Tomatina festival. Not only were people throwing turmeric on each other but they were singing, dancing and rolling on the floor (albeit for religious reasons 😀 ) 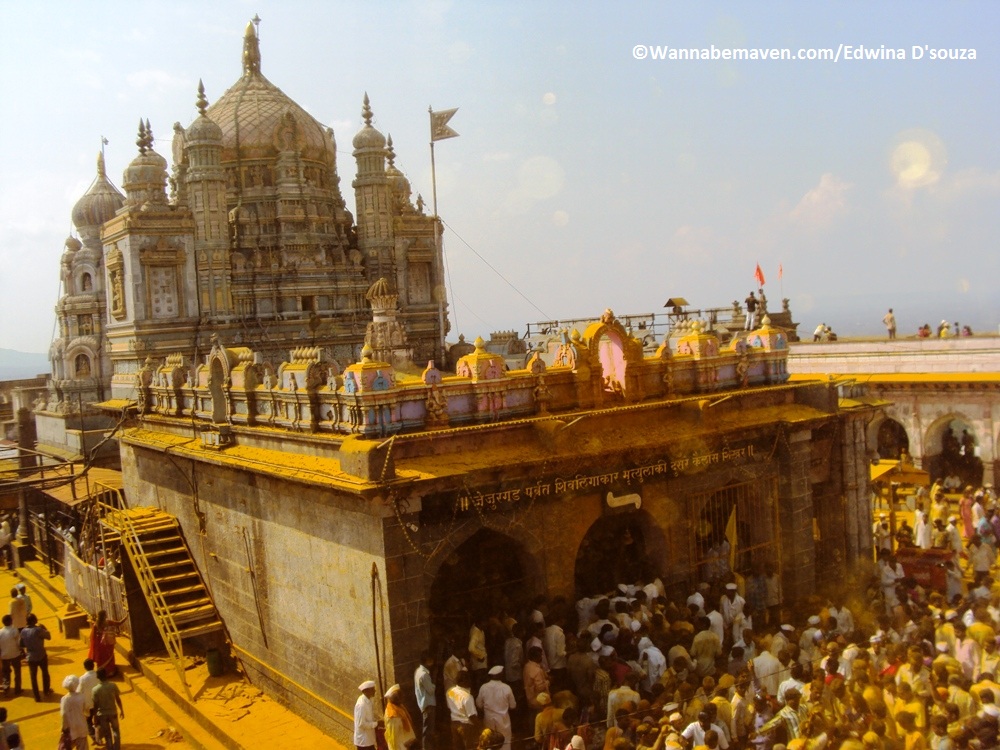 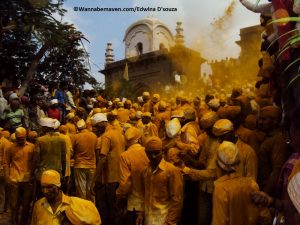 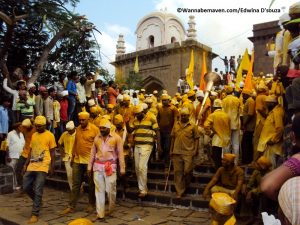 The palkhi or palanquin carries the god for a bath from the temple on the hill to the Karha River at the base. The procession sees thousands of devotees waiting to touch the palkhi, making it one of the most important reasons for the mass gathering. While this is the highlight of your visit, it is a moment to take extreme caution as the frenzy can easily lead in a stampede. The holy procession happens around noon when the palkhi is taken to the river and then around 5pm when the palkhi is taken back to the temple. 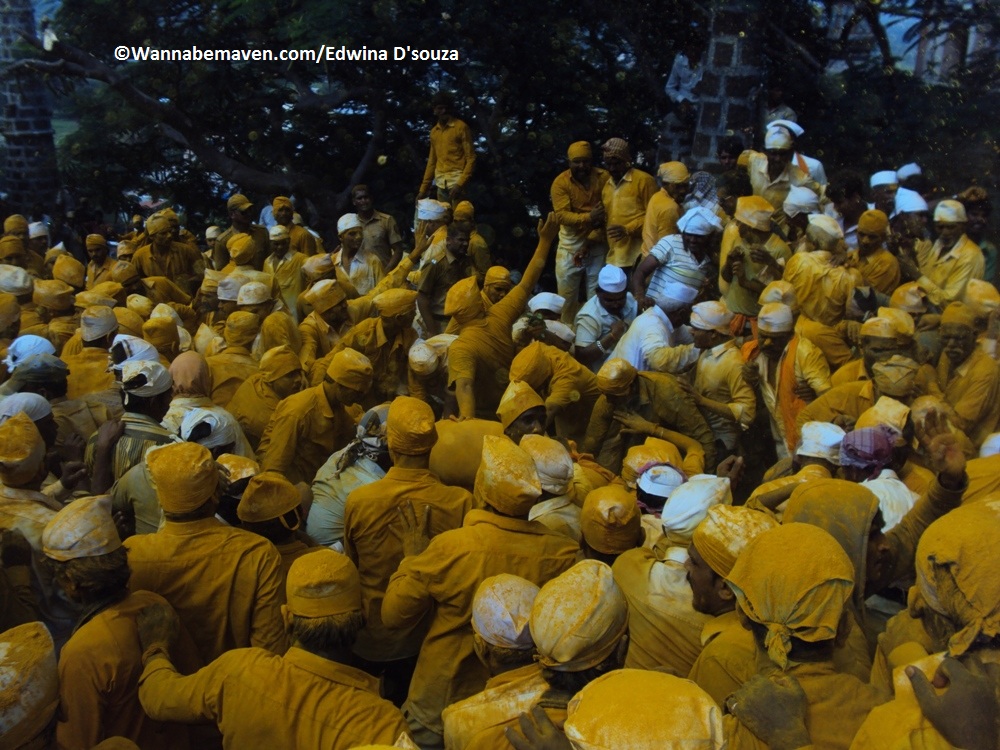 Soon after the crowd dispersed, we made our way to the main temple at the top of the hill and it was a sight to behold. Four deepstambhs in front of the temple looked stunning covered from top to bottom in turmeric. Majority of the devotees were engrossed in prayers, while those from far off places rested in the complex. Few others undertook body hurting rituals like beating themselves with horse whips. But the overall mood was always festive. 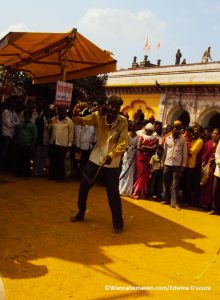 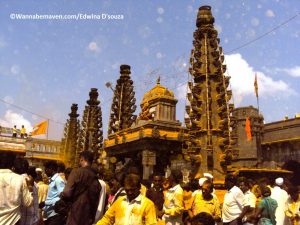 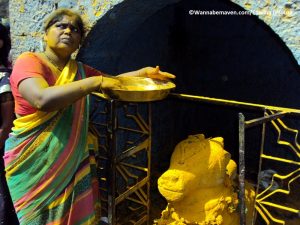 A surprising sight was some butchers chopping mutton on my way to the temple top. This was unlike other Hindu temples where you wouldn’t see a meat shop for miles. Lord Khandoba is worshipped by many communities including the Muslims. Many devotees consider Khandoba to be a non vegetarian and one of the offerings to him is goat flesh. Since Khandoba is a folk deity, few stories have emerged of him dressing not only as a Maratha but sometimes as a Muslim Pathan. 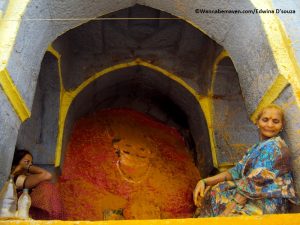 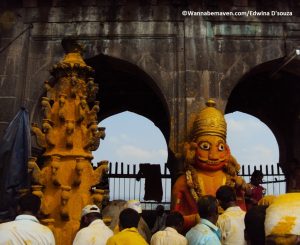 (left) Stone idol of Khandoba smudged with turmeric; (right) The demon Mani who was killed by Khandoba. According to legends, Mani had asked for repentance and hence his idol is placed in the temple as a boon

When I returned from the trip, few of my Maharashtrian friends told me that Khandoba is their kuldevta (family deity). It is believed that a newly married couple must visit the Khandoba temple to celebrate their wedlock. Some of them also visit when they want to make a wish for a child as Lord Khandoba is known as the god of fertility among believers. 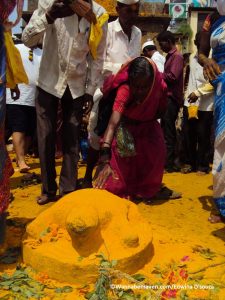 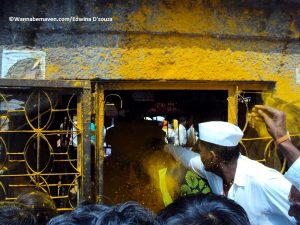 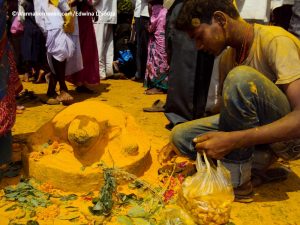 Locals pray to little idols placed throughout the temple

There was little information about the Bhandara festival online. So I had to research on Somvati Amavasya to find a likely date when the festival would be celebrated this year. My trip to Panchgani was planned around the tentative dates to cut down travel time from 4 hours to 2 hours, although it meant that I was backtracking to visit Jejuri. In Panchgani, I confirmed with a local that the festival is indeed happening on the said date (in this case 19 October 2015). 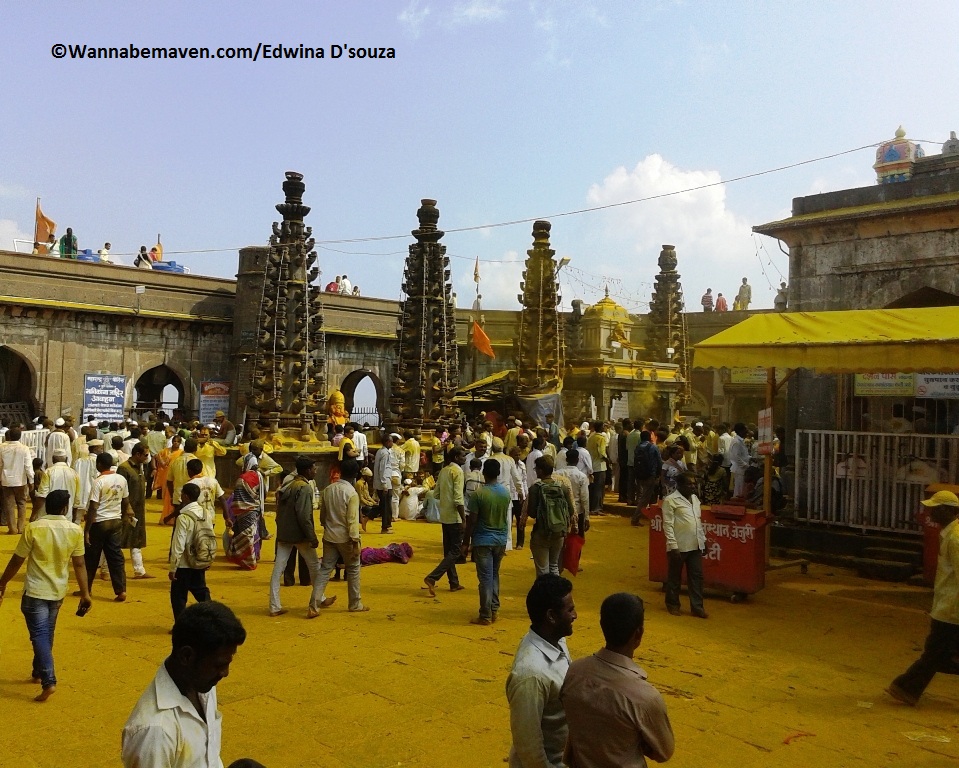 Some things to know: 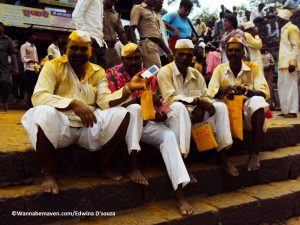 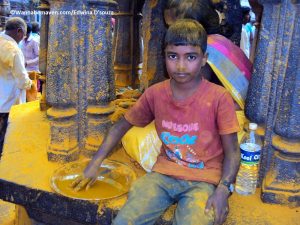 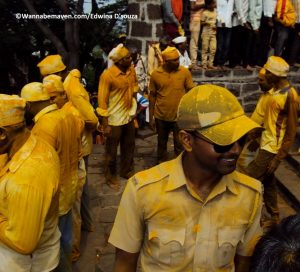 Locals obliged to smile for the camera. Notice the cop in the bottom left 😀

The Bhandara festival at Jejuri is one of the best memories from my travels. For a while I contemplated if I must share this gem of a place and play a role in corrupting its essence by popularizing it. As a travel blogger, I felt compelled to write about the trip. People must know about this unique spectacle especially from Maharashtra’s perspective where so little is known in terms of offbeat rural experiences.

To sum it up for you, the Bhandara festival in Jejuri is a sight you must witness. Try to keep aside your non-religious views, if you must, and come with an open mind. The Bhandara festival will not only surprise but become an experience of a lifetime! 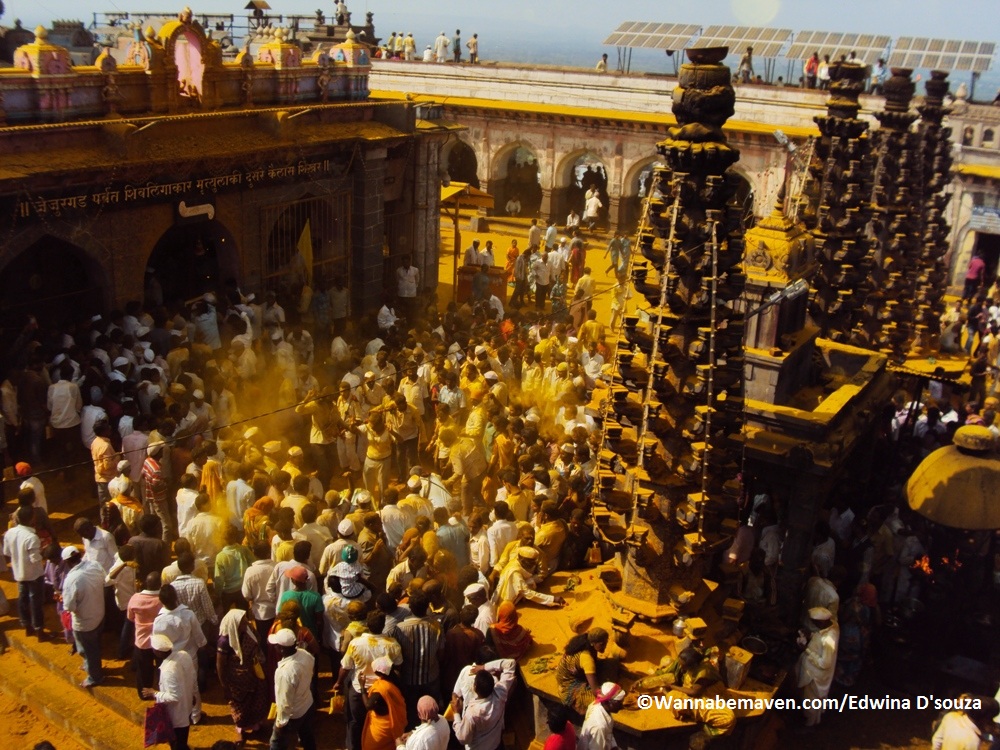 Vallarpadam Church, Kochi is home to an interesting folklore

Pushkar – My experience with priestly thieves